What’s Your Take on the Plastic Bag Bill? 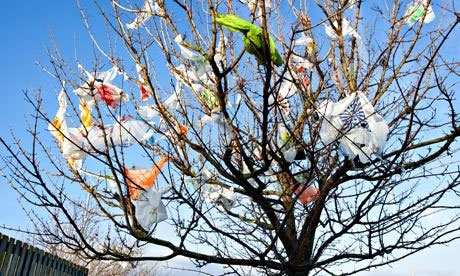 Back in March 2014, the NY City Council began considering the ramifications of ending the long-standing practice of giving shoppers free carrier bags. The bags have a dismal recycling rate, tend to blow everywhere (I mean, who hasn’t seen trees with bags stuck in the branches?) and create problems when they clog storm drains and get into waterways. Some people seem to take the bags- and stores hand them out- without even thinking, so many get used for an even shorter time than disposable coffee cups. Other cities, such as Los Angeles, San Francisco, Seattle and even Washington DC have either banned single-use plastic bags or imposed a small fee, usually 5 or 10 cents per bag.

The reason the bill hasn’t passed, though, is that some Council members worry that the new fee would place an undue hardship on low- and fixed-income households. Proponents argue that this will not happen, because WIC and SNAP recipients won’t have to pay, and the city will work hard to distribute free, reusable bags in lower income neighborhoods.

However, this may not be enough.

Many households do not toss out plastic bags after a single use, but save them to use for garbage bags, wet clothes after swimming in the summer, to protect objects from rain and lots of other uses. And New Yorkers need bags a lot more than suburban shoppers, since most of us do not drive to our local supermarket.

Maybe the best first step is to ask shopkeepers to discourage bag use? Instead of training cashiers to automatically put even single items into a plastic bag, why not first ask people if they really need a bag? It would be interesting to see how much a simple strategy like that, placing the responsibility on the vendor instead of the shopper, might reduce bag waste across the city.

However, here is a super cute video of 5th graders at PS34 arguing for the ban (sorry, fee!). They even made their own bags and gave them away!