As we ease out of the COVID-19 PAUSE in NYC, one thing is making a comeback that nobody wants: traffic congestion. While businesses continue to reopen and more workers returning to their job sites, most people are leery of using mass transit, which can mean only one thing: More driving…which is putting decades of air quality improvements in jeopardy.

“We avoid 17 million metric tons of greenhouse gases a year because of the MTA,” said Julie Tighe, president of the New York League of Conservation Voters. “If we’re swapping that with cars, which are less efficient to begin with, we are going to have a problem.”

Traffic on bridges and tunnels is down only 18 percent on average from its pre-pandemic levels. The number of vehicles entering Manhattan’s central business district is only 15 percent below the volume seen ahead of the public health crisis, according to the city’s Department of Transportation. In early April, traffic was down roughly 60 percent from normal levels.

While subway ridership has rebounded from an all-time low, it’s still down roughly 78 percent from 2019 levels — with just more than one million riders using the system on weekdays. Buses have recovered more quickly, but ridership is still down 50 percent.

While environmental advocates have focused their efforts in recent years on targeting the largest source of emissions — city buildings — they acknowledge transit could become a greater concern in the Covid-19 era.

You can read more about this on Politico.com here. 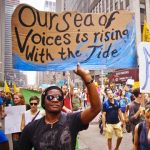 Against the backdrop of renewed calls for racial justice nationwide in the aftermath of the police killings of George Floyd and Breonna Taylor, the state of New York announced on Tuesday a slate of grants totaling more than $10.6 million to help underserved residents access affordable solar energy. The grants will help offset predevelopment costs to address resource barriers that typically prevent low-income residents — particularly communities of color — from installing clean energy or energy storage in their homes.

The Empire State is set to provide individual grants of up to $200,000 each to affordable housing providers, community organizations, and technical service providers to assist low-income households and install solar and energy storage systems meant to benefit entire communities. The New York State Energy Research and Development Authority (NYSERDA), the government agency administering the program, will be hosting a webinar on July 14 to launch the grant opportunities and provide more information on the application process. The state will accept applications on a quarterly basis through the end of 2024.

This initiative is the result of New York’s landmark environmental justice legislation, which helped bring the state’s Climate Leadership and Community Protection Act (CLCPA) to life in January. The CLCPA made headlines for being the most ambitious emissions-reduction legislation in the country, thanks to its promise that the state will reach net-zero carbon emissions by 2050 and 100 percent renewable electricity by 2040. The CLCPA and the accompanying environmental justice bill require the state to make good on its commitments to address environmental injustice and invest in underserved and pollution-burdened communities. Tuesday’s announcement is part of that follow-through.

The Big Apple knows how to do big. Freshkills Park in Staten Island, formerly the world’s largest landfill, is slowly but surely being transformed into New York City’s largest park. It will provide reaction and aesthetic value, but the new park will also become the city’s largest solar farm.

END_OF_DOCUMENT_TOKEN_TO_BE_REPLACED

Contrary to the spectrum of fall color, the Big Apple is turning greener than ever.

END_OF_DOCUMENT_TOKEN_TO_BE_REPLACED

The Manhattan Chamber of Commerce will host a free Breakfast Energy Workshop for small businesses and not-for-profit organizations on Wednesday, October 30, 2013 from 8:00 AM – 9:30 AM at the 3 West Club in Manhattan to help businesses learn how to identify energy savings opportunities and use incentives to offset the cost of an energy efficiency project, save money on their energy bills, and improve their facilities and fleets.

A breakout session will follow at 9:45 AM for lending organizations to learn how to partner with NYSERDA and offer NYSERDA’s low-interest loan products to finance energy efficiency projects. The breakfast event will feature opening remarks from the Manhattan Chamber of Commerce, and expert presentations on programs from NYSERDA, Consolidated Edison (ConEd), and Empire Clean Cities. These and other organizations such as the Small Business Development Center will be on-hand to network, answer questions, and assist attendees in signing up to receive a free small commercial and not-for-profit energy assessment.