Sustainable Irrigation Could Help Feed More than a Billion People

Climate chaos, soaring inflation, drought, war- if you’ve been following the news lately, you’ve seen the dire predictions of a looming food crisis. And even more people will need food in the years to come. In fact, a new study from Stanford University’s Carnegie Institute estimates that the global food supply will need to double by 2050 in order to feed everyone adequately.

At the same time, we can’t meet this need by simply doubling the amount of land we use to grow crops. Deforestation and habitat destruction are among the forces driving climate change in the first place.  But according to the Carnegie Institute study, we don’t have to. We can use the farmland and technology we already have to raise crop production yields to levels that will be sufficient to meet our future needs.

One of the most powerful tools we have to do that is sustainable irrigation.

Currently, two-thirds of the world’s crops are limited by rainfall. Climate change is expected to both shift precipitation patterns and increase heat stress on plants, meaning that relying on rain alone will not keep up with the increased demand for food.

One strategy for improving the productivity of farmland is irrigation. Studies show that irrigated crops are twice as productive as those that rely on rainfall alone. However, irrigation already accounts for between 85 and 90 percent of human water consumption. Is it possible to use irrigation to increase food production without creating water shortages?

Sustainable irrigation relies on groundwater and local available water sources, without depleting them beyond what precipitation can replace or harming freshwater ecosystems. Lorenzo Rosa, the author of the Carnegie study, set out to determine whether these strategies could be expanded to maximize agricultural productivity and minimize the negative environmental impacts of water use.

He found that under current conditions, there is enough water available from local, renewable sources to expand sustainable irrigation over 35 percent of farmland around the world, boosting crop productivity to feed 1.4 billion more people. 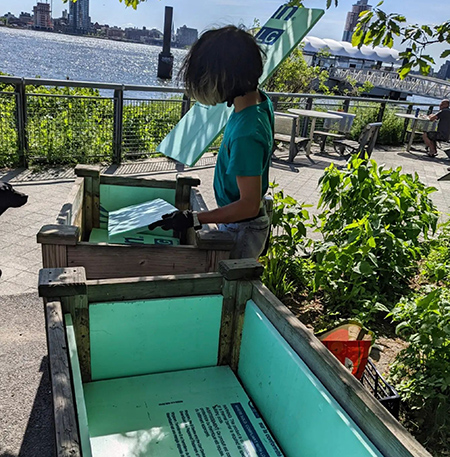 While climate change will change this calculus to an unpredictable extent, planning now to improve water use efficiency could have huge dividends in the near future. And while the regions best suited to adopting sustainable irrigation practices include the US, Russia, Brazil and Nigeria, they could also improve farming conditions in Latin America, Eastern Europe and sub-Saharan Africa.

At Stuy Cove Park, Park Manager Candace Thompson has worked with youth volunteers from the Hope Program/Intervine to build some self-watering planters as part of our own small-scale sustainable irrigation system.

At any scale, water is one of most precious resources, and it’s nothing short of amazing that it just falls right out of the sky on a semi-regular basis. Using it in the most efficient and sustainable way possible is one of the vital tools we’ll need to use to keep our fellows fed.

You can read more about Lorenzo Rosa’s irrigation study on the Carnegie Institution’s website here.