Earlier this week the Trump Administration announced that it was levying a tariff (tax) on all imported solar panels. This tax was supposedly levied to protect American manufacturing jobs, but in reality there are very few USA solar manufacturing jobs to protect. Less than 2% of American solar jobs are in solar panel or cell manufacturing, and the tariff will marginally increase the cost of solar to consumers and therefore slow the growth of more robust sectors of the USA solar industry, which currently employs more than 260,000 Americans.

Those of you reading the headlines may be wondering “How big will the impact be?” or “Will this impact my ability to save money with solar?” Read on for answers to these questions and to learn more about the tariff and what it really means for our domestic solar industry, and for all of us as potential consumers of clean affordable solar energy.

How We Got Here

Before discussing the solar tariff, I’ll provide a 30 second history of the solar industry. The modern solar cell was invented in America, at Bell Labs, in 1953. At the time solar technology was so expensive that it was only used in outer space, where there were no alternatives. During the oil crisis in the 1970s, the governments and global energy companies invested in solar research and development which resulted in solar panel efficiency improvements and cost reductions. Costs declined over time and efficiency continued improving, however until the early 2000s, solar was still too expensive for most applications. In 2004, Germany introduced a nationwide solar incentive program that was wildly successful at encourage rapid deployment of solar in the country, creating demand for large-scale solar manufacturing. Initially the majority of solar manufacturing was in Europe near the market with greatest demand, however over the following years, global solar manufacturing shifted to China, where costs were lower and where the government invested heavily in supporting solar manufacturing. As manufacturers competed for market share, the cost of solar declined dramatically, making solar energy affordable worldwide and thus spurring the growth of the modern American solar industry, which is comprised of solar sales, design, installation and finance companies.

Over the last ten years, solar has become more affordable than ever and solar employment in America is at record highs. However there were a small number of domestic solar manufacturers that were struggling to stay afloat amid the fierce competition from low-cost solar panels manufactured in China and elsewhere outside of the United States. Solar installers, American consumers, and the environment all benefit from low-cost solar panels, so many were supportive of importing low-cost solar panels to fuel our growing solar industry and accelerate our transition to renewable energy. However companies that owned small-scale solar manufacturing in the United States weren’t equipped to compete with low-cost solar panels, and consequently filed multiple international trade cases to keep the price of solar panels higher and/or reduce the availability of low-cost imported solar panels. Previous trade cases resulted in rules that were easy to work around and didn’t significantly impact the domestic solar industry, which continued to grow at a rapid pace.

In May 2017, two bankrupt solar manufacturers (Suniva and SolarWorld, foreign owned companies with US factories) petitioned the International Trade Commission (ITC) under Section 201 of the Trade Act of 1974, arguing that low-cost solar panels manufactured overseas had caused serious injury to the American solar manufacturing industry. In a sense, it’s true that low-cost solar panels manufactured in China and other parts of the world were making it hard for American manufacturers to compete. However at the same time, the remarkable decline in the cost of solar panels globally over the last ten years spurred the rapid growth of downstream segments of the American solar industry including sales, design and installation jobs that can never be outsourced.

In their May 2017 petition, Suniva requested that the federal government impose steep tariffs on imported solar panels and set a floor price under which solar panels could not be purchased. The American solar industry was strongly opposed to the petition, which if adopted as proposed was forecast to cost the United States tens of thousands of downstream solar sales and installation jobs by dramatically increasing the cost of solar. In October 2017, the ITC found in favor of the petitioners and recommended to the White House that they implement a tariff on imported solar panels. Fortunately for most solar companies and consumers (who stand to benefit from low-cost solar), the ITC recommendations were less severe than what Suniva and SolarWorld requested. This week, the Trump Administration adopted the recommended tariffs, which start at 30% and decline each year for four years before phasing out entirely. While 30% tariffs sound severe, fortunately most analysis indicates that the impact on the solar industry and consumers will be relatively modest. 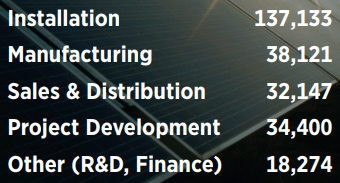 As of the end of 2016, there were more than 260,000 Americans working in the solar industry, with the vast majority of jobs in downstream activities such as sales, project development, and installation. Less than 15% of solar workers are in the manufacturing sector, and only 2% manufacture solar panels.

While a tariff could (in theory) encourage domestic manufacturing of solar panels, the most significant and near-term impact will be stunted growth among solar installation companies. According to the Solar Energy Industries Association (SEIA), the tariff will increase the cost of solar, suppressing consumer demand and cost the United States an estimated 23,000 jobs. While this is a significant loss, fortunately most of these are jobs that will not be created due to a slowing of growth in the solar installation market (rather than layoffs). The solar industry will continue to grow along with demand for affordable clean energy, albeit at a slower rate than it would without the solar import tax.

Impact on Solar Costs for Consumers

While a tariff of 30% sounds high, the reality is that the cost of solar for most residential and small commercial solar customers will only be marginally impacted by the tariffs and solar will continue to be a very strong investment. Why will the impact of the tariff be modest? First, for residential solar projects, solar panels only comprise a small percentage of the total cost of installation (~13% according to Bloomberg New Energy Finance), which also includes the cost of labor, design & engineering, sales/marketing, and the balance of systems. Even if solar panels were to increase in price by 30%, this would only translate to a roughly 5% increase in the cost of solar to consumers. The reality is that for many solar consumers, the price of their solar installation will not increase at all; the costs of solar panels have already been artificially inflated since the summer of 2017 due to speculation that the ITC would impose a tariff and we don’t anticipate that many (if any) residential or small commercial solar proposals or contracts will be modified based on supply costs.

Solar in New York City is currently and will continue to be a strong investment; solar energy systems in NYC offset Con Edison electricity, which is among the most expensive in the country, plus solar projects continue to be eligible for strong federal, state and local tax incentives. Solar in NYC typically has a payback period of 4-7 years and offers building owners a 10-20% rate of return on their investment.

In conclusion, the solar panel import tariffs could temporarily dampen growth in the USA solar market, but solar continues to be one of the best investments that a building owner can make, and the solar industry will continue to be a bright spot in the American economy while catalyzing our transition from fossil fuels to clean renewable energy.

Noah is the director of Solar One’s Here Comes Solar program which assists NYC building owners and community groups to move their solar projects forward. Are you interested in installing solar on your building or participating in a community shared solar project? Complete the survey at www.herecomessolar.nyc to speak with Solar One staff regarding how solar can work for you.