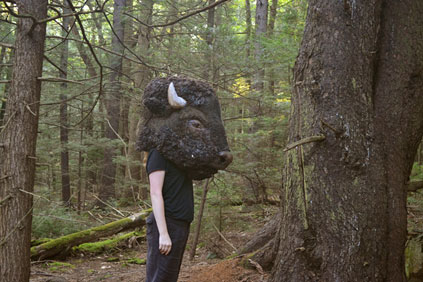 Rachel Frank will be presenting a performance based on rewilding, an environmental practice that seeks to reestablish the landscape’s former ecosystems and increase sustainability by reintroducing species to areas in which they had formerly thrived but have since gone extinct. In Frank’s performance, actors wearing American bison head masks will symbolically rewild Stuyvesant Cove against the backdrop of the East River and views of Brooklyn and Queens. Performing in Stuyvesant Cove, a park established on land that was once an abandoned industrial site, this performance is part of a larger project, which uses the concept of rewilding to explore how we think about the landscape around us—its past, present and sustainability into the future.

Rachel Frank uses video, sculpture, and performance to explore themes combining the theatrical, man’s relationship to the natural world, and loss.  She is the recipient of numerous awards, including grants from The Pollock-Krasner Foundation, Franklin Furnace Archive, and The Elizabeth Greenshields Foundation. Residencies include The Marie Walsh Sharpe Foundation, The Women’s Studio Workshop, Sculpture Space, Yaddo, and Skowhegan.  Her Rewilding performances were developed during a residency at The Catskill Center’s Platte Clove cabin and have been performed at Socrates Sculpture Park and The Select Fair in NYC, well as various locations in the Catskills.

More information can be found at: http://www.rachelfrank.com

While honoring the traditional North African roots of the banjo and its influence on Appalachian Mountain music, New York City-based performer Baby Copperhead’s music is often described as “otherworldly” or “sci-fi” because of his experimental weaving of handmade electronics within his songs. This May, Baby Copperhead is releasing his fourth studio record, Strings for Color, featuring songs arranged for string trio. He has toured throughout the US, Europe, and Asia and performed with many luminaries across the globe. WNYC calls him “the banjo visionary…whose specialty is taking the banjo and treating it with a sci-fi glaze.”

20th Street and FDR Drive on the East River

This event is free and open to all ages

Performed by: Rachel Frank and others, TBA.