On a Mission to Make Compost Cool 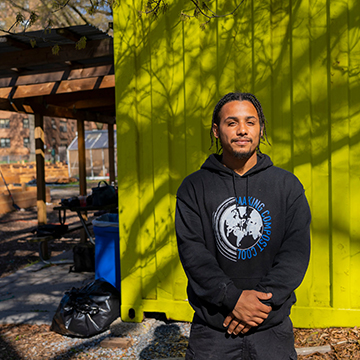 Domingo Morales was a young father living in public housing in East Harlem when he saw a flyer from Green City Force, a Brooklyn non-profit and longtime Solar One partner that trains young people for green careers. He signed up for the program and fell in love with composting. Last week, Mr. Morales and the program he created and runs, Compost Power, were featured in the NY Times.

His story is an inspiring example of how green workforce training and environmental education can have a huge impact on individuals, families and communities.

Compost Power provides composting service for urban farms at NYCHA public housing complexes, where as many as 600,000 New Yorkers live, and composting food scraps, which produce huge amounts of methane gas when allowed to decompose in landfills, can have a profound effect on curbing the greenhouse effect. Methane traps much more heat in the atmosphere than carbon dioxide.

“For many years, compost has been that evil, stinky upper class thing that white people do,” Mr. Morales told the Times. “But it’s really a great introduction to sustainability as a whole.”

And the Times isn’t the only media institution that’s noticed what Mr. Morales is doing. He has been named “New Yorker of the Week” by the television station NY1, and profiled on the “How to Save a Planet” podcast as well as by the climate site Grist. In the fall of 2020, he won a $200,000 prize to take his composting ideas citywide, after which his face appeared on a billboard in Dumbo, Brooklyn.

All of which are remarkable feats for anyone, not least Mr. Morales, whose onetime goal in life was to make it to 18 alive.

“To be a kid from the hood and then person on the news, an educator, teacher, mentor, role model — it’s good,” Mr. Morales said.

You can read the full profile on the NYT website here.