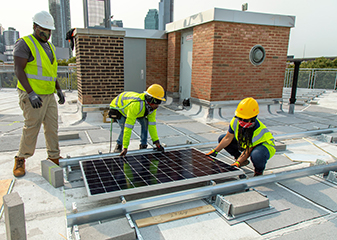 A solar developer team led by Bright Power, Sol Purpose, and Sunwealth Power worked with
the Authority to design, install, and maintain the solar systems. NYCHA will receive $1.3 million
in lease revenue over the next 20 years. As a part of this project, a cohort of NYCHA residents
have been trained in solar installation and have received their OSHA certification. The project
team has hired 13 NYCHA residents and community members as full-time installation
employees for this project, with opportunities for advancement and permanent employment.

The electricity generated from these systems will provide a discounted electricity rate for approximately 470 New York City households.  A portion of this power will be reserved for low- and moderate-income New Yorkers, including NYCHA residents who pay their own electric bills.  The project will also dedicate a portion of its profits to fund scholarships for low- and moderate-income New Yorkers.

As part of the HUD Renew300 program and the NYCHA Sustainability Agenda, NYCHA has committed to host 25 megawatts of solar power on its property by 2025.  The energy produced by these installations will also contribute to meeting Mayor Bill de Blasio’s climate change goals, including reducing greenhouse gases by at least 80 percent by 2050.

In 2018, NYCHA awarded one of its first opportunities for solar development on NYCHA-managed property to a team led by Bright Power, Inc. and Sol Purpose.  Bright Power is a local firm with extensive experience developing solar on multifamily affordable housing in New York City (including solar on NYCHA’s first RAD conversion at Ocean Bay-Bayside). Bright Power has designed and led construction of these systems.

Sol Purpose is a New York-based firm that was founded to support the Bard Prison Initiative, and which has been managing all aspects of this project. Bright Power and Sol Purpose have also brought on Sunwealth Power, who is financing the system and will own and operate the arrays long-term.

Additional team members include Solar One and Green City Force, who have assisted in the training and hiring of NYCHA residents; Solstice and Arcadia, who are providing customer subscription and outreach; and Venture Solar, who has been contracted to carry out the installation of the systems.

The electricity generated by the solar arrays, also known as “community shared solar,” will belong not to NYCHA, but to residents and neighbors who subscribe to the service. Community solar arrays allow for renters who do not own their own roof space (or residents whose own roof space is not suitable for solar) to access the benefits of low-cost solar power.