Meet Our New Board Members 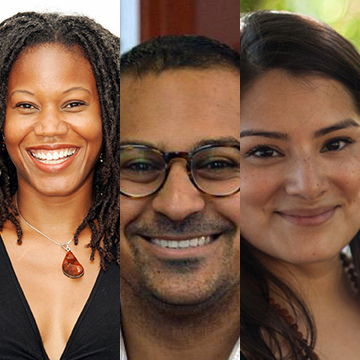 Solar One couldn’t be more pleased to introduce the three newest additions to our Board of Directors: Majora Carter, Stephan Roundtree and Adriana Espinoza. All of them bring impressive credentials, expertise and experience in sustainable community development, policy making and environmental justice.

Majora Carter is a real estate developer, urban revitalization strategy consultant, MacArthur Fellow and Peabody Award winning broadcaster. She is responsible for the creation and successful implementation of numerous economic developments, technology & green-infrastructure projects, policies and job training & placement systems, and is the founder of Sustainable South Bronx. Majora has served on the boards of the US Green Building Council, Ceres, The Wilderness Society, and the Andrew Goodman Foundation.  She is quoted in the permanent collection of the Smithsonian Museum of African-American History and Culture in DC: “Nobody should have to move out of their neighborhood to live in a better one”.

Adriana Espinoza is a social worker by training and an environmental advocate by vocation. During her graduate studies at the University of Texas at Austin, she worked in the Texas House of Representatives, conducting policy analysis focusing on public education, healthcare and criminal justice reform. In that role, Adriana was also part of the team that supported Sen. Wendy Davis’s historic filibuster for women’s health care legislation. After graduating and moving to New York, she worked on election reform and voting rights before becoming the NYC Program Director for the New York League of Conservation Voters. While at NYLCV, she advocated for bold climate policies such as the Climate Mobilization Act and fought alongside other advocates to elevate environmental issues affecting low-income and minority communities across the city. She currently serves as New York’s first Senior Advisor for Environmental Justice in the NYC Mayor’s Office of Climate Policy, overseeing the development and implementation of the City’s environmental justice laws and initiatives.

We are grateful for the generosity, dedication and vision these new Board members bring to the Solar One organization, and welcome them with thanks!