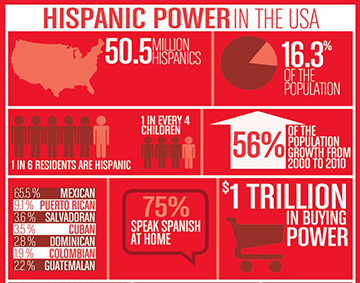 In the US, the monthlong period from September 15-October 15 is designated as National Hispanic Heritage Month, a great time to pay tribute to the Mexican-American, Puerto Rican, Colombian-American, Argentinian-American, Peruvian-American and Cuban-American (among many other) scientists, researchers, astronauts, doctors, mathematicians and physicists who have done so much work in the fields of science, technology, engineering and mathematics.

Since 1968, the US has celebrated the many contributions of Americans of Latinx descent. Initially a week but expanded in 1988 to a month, this cultural recognition period begins in mid-September because it is the anniversary of the Cry of Dolores (early morning, 16 September 1810), which marked the start of the Mexican War of Independence and thus resulted (in 1821) in independence for the New Spain Colony (now Mexico, Guatemala, Belize, El Salvador, Costa Rica, Honduras, and Nicaragua).

Of course, immigrants from many other countries throughout Latin America are part of the celebration, and the term “Hispanic” is not without controversy, as it only acknowledges the influence of Spain rather than the Indigenous and African traditions and heritage that are also an important piece of this history.

We hope this list inspires everyone with the knowledge that in every era of our history and segment of our population, however we define that, there have been individuals who have expanded our knowledge, improved our lives and made the impossible possible. ¡Muchas gracias a todos!