For Black History Month, Learn About the Memphis Sanitation Strike 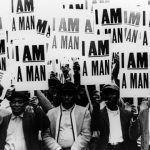 Black History Month is almost over, but Black history is rife with stories that can enrich our lives and teach us more about our communities throughout the year. A case in point: The Memphis Sanitation Strike.

The strike, which began just seven weeks before Dr. Martin Luther King Jr.’s assassination in Memphis on April 4, 1968, was the second attempt by the sanitation workers to strike for fair wages and safe working conditions, and was sparked by the tragic deaths of two garbage collectors, Echol Cole and Robert Walker, who were crushed by a malfunctioning truck.

On 11 February, more than 700 men attended a union meeting and unanimously decided to strike. Within a week, the local branch of the National Association for the Advancement of Colored People passed a resolution supporting the strike. The strike might have ended on 22 February, when the City Council, pressured by a sit-in of sanitation workers and their supporters, voted to recognize the union and recommended a wage increase. Memphis mayor Loeb rejected the City Council vote, however, insisting that only he had the authority to recognize the union and refused to do so.

The night before his assassination in April 1968, Martin Luther King told a group of striking sanitation workers in Memphis, Tennessee: “We’ve got to give ourselves to this struggle until the end. Nothing would be more tragic than to stop at this point in Memphis. We’ve got to see it through” (King, “I’ve Been to the Mountaintop,” 217). King believed the struggle in Memphis exposed the need for economic equality and social justice that he hoped his Poor People’s Campaign would highlight nationally.

On 8 April, four days after Dr. King was killed on the balcony at the Lorraine motel, an estimated 42,000 people led by Coretta Scott King, SCLC, and union leaders silently marched through Memphis in honor of King, demanding that Loeb give in to the union’s requests. In front of City Hall, the American Federation of State, County, and Municipal Employees (AFSCME) pledged to support the workers until “we have justice” (Honey, 480). Negotiators finally reached a deal on 16 April, allowing the City Council to recognize the union and guaranteeing a better wage. Although the deal brought the strike to an end, several months later the union had to threaten another strike to press the city to follow through with its commitment.

You can read more about the Memphis Sanitation Strike on the King Institute of Stanford University website here. Special thanks to Betsy Pichizaca, Here Comes Solar’s social media intern, for bringing this piece of environmental justice history to our attention via the HCS Instagram page, which we encourage you to follow for more excellent content like this!