“We must all do our part to make New York a more sustainable City. The Solar One Workforce training program provides needed green job training skills to New Yorkers, and I’m proud to support this important initiative,” the Speaker told our trainees as she toured our lab in Long Island City.

“Our program offers courses in green building operations and maintenance, energy auditing and solar installation. Since it began five years ago, it has trained over 1,500 chronically un/underemployed individuals, as well as employed building managers, improving their careers, and even turning some of their lives around,” Chris Collins, Solar One Executive Director, told our city representatives.

Louis Davis, Jr. told the a reporter from the Long Island City/Astoria Journal that his training not only give him a shot at getting a good job, but “it really opens your brain,” giving him a completely new perspective on “how much we’ve been hurting the planet.”

“We’ve learned about the little things we can do to make changes in our daily lives, in our houses, to cut down on our carbon footprint,” Davis added.

Council Member Van Bramer told the students in a question and answer session that “the jobs you are training for are good jobs that pay really well with benefits.”

Council Member Richards emphasized that it “was heartwarming” to see so many people, “especially people of color, who have been disenfranchised,” getting opportunities and jobs in the green economy.

“Solar One has been on the forefront of equipping capable, talented and young people with the skills and the knowledge to fully participate in our city’s growing green economy,” said Council Member Richards. “Their hard work and commitment to renewable sources of energy has set a high standard that is recognized across the industry. After being one of the first recipients of a Greener NYC funding made available through the speaker’s office last fiscal year, I experienced firsthand some of the impressive work that they do. I look forward to further collaboration with Solar One as the city continues to work to meet its sustainability goals.”

James King, our training lab Site Coordinator, and a graduate of our program, led the tour and was delighted to find the Speaker so engaged by the lab’s blower door testing equipment, which energy auditors use to test a building’s airtightness.

“I explained that it lowers the air pressure inside a home or building, and then auditors use a smoke pencil to detect where and how the outside air (with higher pressure) flows into that home or building. The Speaker seemed really captivated by it,” King remarked.

The tour ended with a demonstration of how to install solar panels on a roof by four of Solar One’s Workforce trainees, who through their outstanding performance in the program, have been selected for six week internships with OnForce Solar, a New York City based solar installer. These internships can lead to what the Council Members noted are well-paying jobs and a new career.

The interns thanked the Solar One staff and Council Members for “giving us this opportunity” and instructed our representatives on how a solar panel inverter converts direct current to alternating current, which is then used to charge a battery.

Finally, the Speaker got the chance to see solar in action, when the interns asked her to flip a big red switch to light up a large sculptor of the Solar One logo they created, wrapped in LED Christmas lights.

“One, two, three!” the Speaker shouted and flipped the switch.

When the Solar One logo lit up with blinking white lights everyone instantly burst into applause. 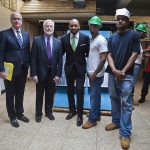 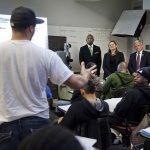 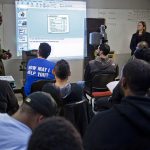 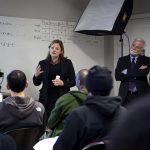 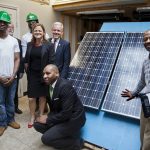 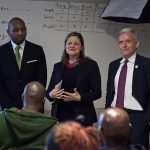 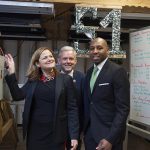 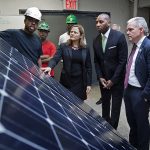