How to Help the People of Ukraine 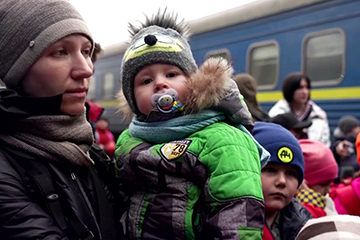 Since the start of the Russian invasion on February 24th, news feeds have been dominated by reports and photos of the ever-expanding humanitarian crisis engulfing Ukraine. As men are being compelled to stay in the country and fight, women and children have been displaced by the millions, creating one of the most dire and extreme refugee crises in Europe since World War II. While it seems that Vladimir Putin and the Russian government expected a weak or even non-existent defense of a much smaller and poorer country, Ukrainians have made a robust defense of their homeland which shows no sign of bending to Russia’s will to conquer. As a result, Ukraine’s refugees will likely need support for some time to come.

If you have the means and feel moved to help, here are some ways to support Ukraine during these difficult times.

END_OF_DOCUMENT_TOKEN_TO_BE_REPLACED

Fifth Avenue Committee, in partnership with Solar One and with support from Enterprise Community Partners, has launched Barrio Solar, a program to provide financial assistance to low- to-moderate income Brooklyn homeowners to help them install rooftop solar panels. Solar can help homeowners lower their Con Edison bills, lower their property/income taxes, and reduce their greenhouse gas emissions. The campaign is open to all Brooklyn homeowners, and participants will receive free solar consultation from trusted non-profits and discounted pricing through a solar purchasing group. The first 25 low- to moderate-income homeowners that sign up will receive a campaign-specific incentive of $3,500 to apply towards the cost of solar panels or roof repairs, helping make solar affordable to the homeowners who can benefit most from the savings. Barrio Solar is also connecting homeowners who can’t install solar with local community solar projects that provide guaranteed utility bill savings.

END_OF_DOCUMENT_TOKEN_TO_BE_REPLACED

Tweet
by Michael Barryon 01/14/2022 in New York City, S1 in the News tagged board of directors, climate change, solar one

Amy C. Poster, a seasoned risk and regulatory affairs executive, and Ann Davlin, Chief Strategy Officer at Dynamhex have been appointed to the Solar One Board and started their service on January 1, 2022.  These new Board members join at a time when Solar One is increasing its role in assisting New York City in reaching its ambitious climate change mitigation targets.

New York City, NY January 13, 2022 – New York City nonprofit Solar One has seen substantial growth and widespread impact of its programs in the last several years, despite the challenges of the pandemic and the virtual work environment. The Solar One Board, which provides governance oversight and strategic guidance for the organization, has appointed two new Board members, Amy C. Poster, a risk, regulatory, and governmental affairs consultant, and Ann Davlin, Chief Strategy Officer at Dynamhex, bringing total board membership to sixteen.”

END_OF_DOCUMENT_TOKEN_TO_BE_REPLACED

Stephen Levin will join Solar One as CEO as of January 10, 2022, after serving as New York City Councilmember for District 33 since 2010. He takes the helm of the organization following the retirement of Christopher J. Collins, who led Solar One for 17 years.

New York City, NY January 5, 2022 – Solar One is pleased to announce the appointment of Stephen Levin as Chief Executive Officer. Stephen joins Solar One after 12 years as a member of the New York City Council for District 33, serving neighborhoods of Brooklyn including Greenpoint, parts of Williamsburg, Vinegar Hill, Dumbo, Brooklyn Heights, Downtown Brooklyn, Boerum Hill, and parts of Bedford-Stuyvesant.

As an award-winning New York City nonprofit, Solar One is dedicated to sustainability and resiliency in urban neighborhoods and delivers a wide array of programming providing environmental education services to diverse program participants. Solar One welcomes Stephen to lead the organization in its next phase of growth, building on a strong financial foundation, highly regarded programs, strong partnerships with government agencies and community partners.

During his tenure as a Councilmember, and as Chair of the New York City Council’s General Welfare Committee, Stephen focused on ensuring homeless families and individuals have access for permanent housing and guaranteeing long term support for those in the foster care system. During his tenure, Councilmember Levin served on multiple committees including the Environmental Protection, Land Use, Cultural Affairs, Education, and Transportation committees, as well as the Land Use Subcommittee on Landmarks and Public Siting.

END_OF_DOCUMENT_TOKEN_TO_BE_REPLACED

This unrestricted grant of $500,000 will enable Solar One to strengthen our programming, bringing those most affected by environmental injustice to the forefront of developing and benefitting from the clean energy economy.

New York City, NY (December14, 2021) – Solar One was selected by Citi Foundation as a recipient of the Community Progress Makers initiative, which supports visionary organizations across the U.S. that are working to connect low-income communities and communities of color to greater social and economic opportunity. As a Community Progress Maker, Solar One will receive a multi-year, unrestricted grant of $500,000 and access to technical assistance and a supportive learning community from 2022 – 2023.

Through Citi Foundation’s support, Solar One will be able to expand and enhance its programs in K-12 environmental education, green workforce training, solar installation technical assistance, and eco-park stewardship. Through programs like these, Solar One transforms the way people think about energy, the urban environment, and resilience.

“We are truly honored to be included in this year’s cohort of grant recipients, all of whom are doing such crucial work in cities around the country,” said Solar One’s Executive Director Christopher J. Collins. “With the support of the Citi Foundation and the Community Progress Maker program, we will be able to reach more stakeholders and program participants in our community and facilitate new ways living, working, and thinking that are a crucial component of our response to a world affected by climate change. We are looking forward to connecting with other grantees and working with the Urban Institute to collectively amplify the work each our organizations do individually.”

END_OF_DOCUMENT_TOKEN_TO_BE_REPLACED

Where Was the First Rooftop Solar Panel Installation?

We haven’t done a #ThrowbackThursday post in quite a while, but lately, Solar One and our partners have been making significant progress in bringing solar power to underserved communities in New York City. But surprisingly, that’s not as new an idea as one might think.

In 1839, a young physicist in France, Edmond Becquerel, discovered the photovoltaic effect— the process that produces voltage (essentially an electric current) when exposed to light or radiant energy. Following in his footsteps, French mathematician Augustin Mouchot continued his work and started registering patents for solar-powered devices as early as the 1860s. In the U.S., inventors filed for their own patents on solar-powered devices as early as 1888.